💡 Tip: Save time and money with Paris City Cards:
View Discounts
Skip to content
Things to do in Paris / Attractions in Paris / The Notre Dame Cathedral in Paris 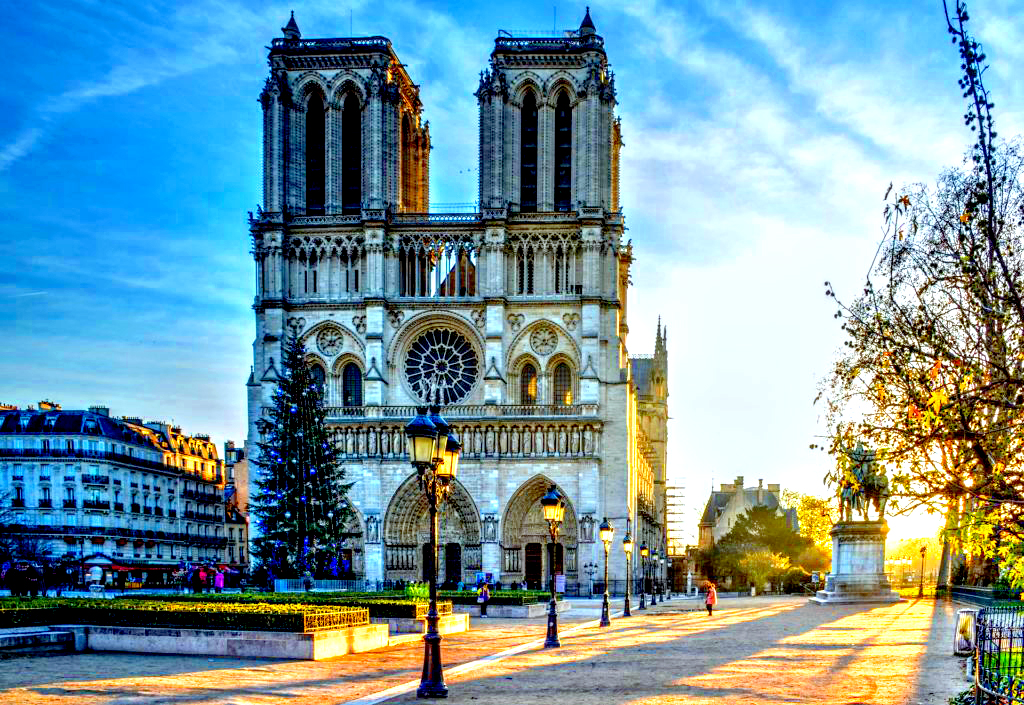 Standing as one of the most imposing and oldest French cathedrals, the Notre Dame de Paris construction began in the 12th century, but due to wars and the intense political landscape at the time, wasn’t actually completed for about 300 years.

It was designed largely with a French Gothic architecture, but you can see that it was also inspired by the times (Naturalism, Renaissance) while being built; it has special and stunning beauty with both its paintings and architecture, as well as a sort of strength and endurance to it. If you think about the fact that it didn’t just survive the test of time, but it survived through several wars.

When the French Revolution was taking place, the Cathedral of Notre Dame was constantly in the crosshairs and received a lot of damage, but it was saved by a professional engineer who managed to keep both its beauty and status intact. Having both a powerful beauty and an amazing symmetry, this must-see of Paris has witnessed a lot of vital ceremonies both for Christianity and in terms of world history.

No matter their faith, travelers from across the globe visit Paris and its many monuments and at the top of their list, you will always find Notre Dame. No one who enters or see it will be unmoved or unsurprised by the Cathedral’s grace.

It was the location of Joan of Arc’s beatification. Almost everyone knows her story whether it be from a history book or a movie. A simple peasant girl in the French history books who was extremely brave and declared that she was having visions from God.

She was an inspiration for the soldiers and French people. Her military tactics which she obtained from her visions helped France win many battles against the English. Her support for the monarchy helped get Charles VII crowned as King. She ultimately ended up being charged with heresy and burned at the stake only to later be declared innocent and a martyr. Pope Pius X led her beatification in the Notre Dame Cathedral.

After the Revolution, the cathedral was in very bad shape. Victor Hugo’s book, The Hunchback of Notre Dame (originally title Notre-Dame de Paris) sparked an interest in Gothic aesthetics and helped create interest which ultimately led to renovations and restoration.

THINGS TO DO AND SEE AT THE NOTRE DAME CATHEDRAL

You’re really going to have a lot of options when it comes to exploring the Cathedral of Notre Dame. It’s easily one of the most gorgeous churches in all of France and it competes with the best in the world in terms of beauty and architecture. From the front of the Cathedral, you can enter the crypt where tourists can visit the historical ruins which date back to Paris’ earliest settlements. Climbing the 387 steps to the top of the Cathedral has a fee attached to it along with a nice workout, but if you love amazing views, its worth the effort.

The gardens of Square Jean XXIII and a very pretty view of Notre Dame can be found on the East and South sides behind the Church. And of course, inside the Church is a free visit back in history stocked full of beautiful treasures in art and architecture which will amaze anyone and everyone.

Explore the Inside of Notre Dame

Right when you walk in and you look up at the massive vaulted ceiling and stare ahead to the stained-glass windows, you know you are in a place of both immense beauty as well as great historical importance. The Great Organ, one of the most famous Organ’s in the world and one of the three in Notre Dame is the largest organ in France.

Dating back over 700 years, the three rose windows have somehow managed to survive revolutions and wars and are probably the most amazing internal feature. Offered by King St. Louis,  (Rose du Midi) the South Rose, symbolizes a triumphant Jesus Christ reigning in heaven and the rose is dedicated to the New Testament. The three rose windows are a must see since they are considered to be some of Christianity’s greatest masterpieces.

The Treasury, which conserves and protects the sacred religions objects has priceless items from Napoleon’s coronation robe to many chalices, crosses, and crowns (many made of gold and jewels). One relic the cathedral hosts is the Holy Cross of Thorns which has been prayed to by Christians for over 16 centuries.

The entrance to the crypt can be found in front of the Cathedral and there is a small entrance fee of a few euros or its free with the Paris Pass.

Below the shadows of the Notre Dame, the Crypte Archéologique extends about 80 meters and is a massive and haunting area full of remains and artifacts that show you the lives before Paris. You can see a house from Lutèce (the area that is now Paris) and many artifacts from the Roman Empire and what Paris (before it was Paris) looked like under that rule.

It’s a bit of a climb, but if you love having amazing photos for Facebook and Instagram like most people these days and you’re not afraid of a little exercise, the several hundred step climb to the top of Notre Dame is worth the price of admission (10 Euros).

For me Sacre Cœur Basilica and the Eiffel Tower have absolutely amazing views, but the view from atop Notre Dame de Paris is the winner! You can see all around Paris. As you will see just a sentence below, this is the exact center of Paris and there is really no better place to view it from.

It’s also pretty cool that you can get some great shots of and with the gargoyles.

If you’re wondering what the small crowd of people is looking at, trying to figure out what this cool marker in the ground is, you’ll already know because it’s the Paris Point Zero marker. From this point (Kilometer Zero or Point Zero), all other distances around Paris are measured. So right in front of the Notre Dame Cathedral is the official center of Paris! That octagon shaped brass plate set into the stone marks this exact spot.