Skip to content
Things to do in Paris / Bridges 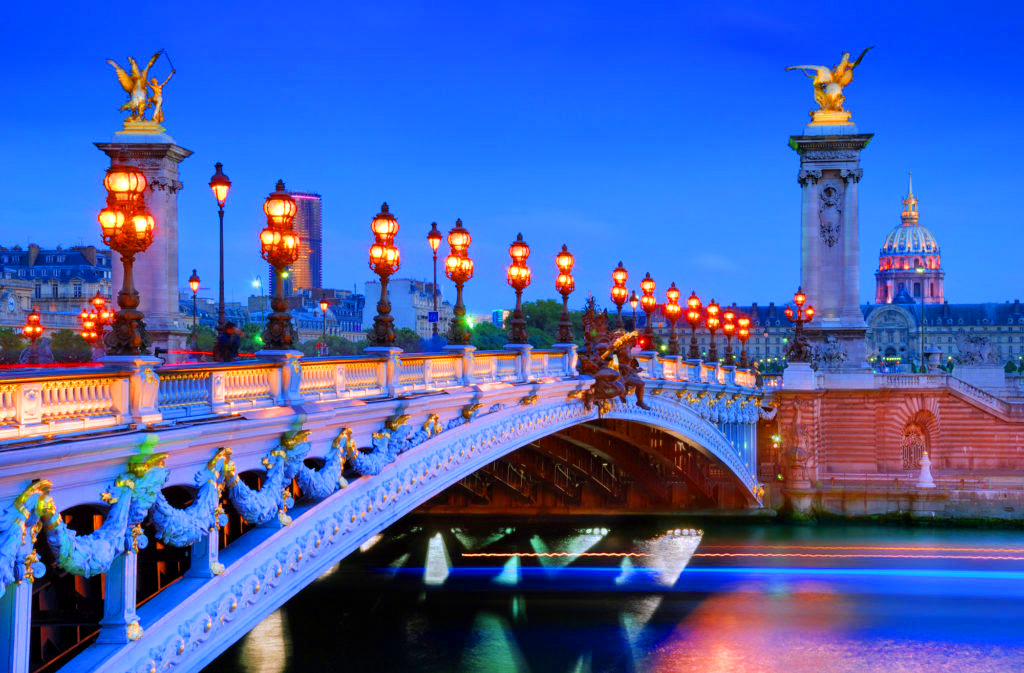 The most beautiful bridge in Paris or any city is the Pont Alexandre III built in the 19th Century from 1896-1900. An arched bridge, it connects the Champs-Élysées quarter (north) and the Invalides and Eiffel Tower quarter (south) across the Seine River. It is regarded as one of the most elegantly ornate bridges in Paris. Of the artistic features are four granite columns that are topped with gilded bronze statues on each side of the bridge representing Pegasus held by Fame. The Grand and Petit Palais on the north or Right Bank and the Esplanade des Invalides on the south or Left Bank are directly on opposite sides of the Seine connected by the Alexandre III Bridge.

This marvelous bridge was built between 1896 and 1900. The bridge was named after Tsar Alexander III and he is the same person who had cleared the Franco-Russian Alliance in 1892. The son of Alexander III, namely Nicholas II, was the one who laid the foundation stone back in October 1896. The Grand Palais on the right bank of the bridge is where the bridge gets its inspirational design.

The bridge was considered an engineering marvel for the 19th century. It consists of a six-meter high single span steel arch. The design of the bridge was innovative and it was subject to strict controls that have continued to prevent the bridge from obscuring the view of the Invalides or the Champs-Élysées. The design was created by the architects Gaston Cousin and Joseph Cassien-Bernard and built by two engineers: Amédée d’Alby and Jean Résal. It was then inaugurated for the Universal Exhibition back in 1900. The bridge is now classified as a historical monument.
If you are planning to have your dream vacation in Paris, be sure not to miss seeing this marvel. It is really amazing what modern engineering can create.

Admission Fee for the bridge:

Getting to the bridge:

Ironically called Pont Neuf (“New Bridge”), it is the oldest bridge that still stands on the river Seine in Paris. Its construction started in 1578. It’s kind of ironic that the oldest bridge across the Seine is called New Bridge, but the name has stuck through time. At the time it was built, there were old bridges lined with homes on both sides all the way across.

Its longevity is due to the fact that it is built of very durable stone. It was able to withstand every flood on the Seine. During its time, the bridge was a bit unusual because it was not designed to accommodate homes like the older bridges. Though at some time, it had street vendors. It was also the first area in Paris to have sidewalks.

The Pont Neuf is located at the western point of Île de la Cité,  the island that us in the middle of the Seine which in medieval Paris, was the center of the city.

It crosses the Seine at the western end of the Île de la Cité, an island where the Notre-Dame Cathedral is located. The bridge has a long arm by the north side and a short arm on the south area, which makes it the longest bridge found in Paris if you combine the two arms together.

In 1550, Henry II was asked to construct a bridge here since the existing Pont Notre-Dame was overcrowded. However, during that time, the cost of construction was too much.

In 1577, King Henry III decided to build the bridge and laid the first stone in 1578. During that year, the foundations of the four piers were made and completed. It was in 1579 when the place underwent a major change, widening the bridge so that houses could be constructed, making the piers longer on the long arm. The piers were made after nine years. A long delay occurred in 1588 because of the Wars of Religion. That’s why construction resumed in 1599. The bridge was finished under King Henry IV’s reign and he inaugurated it in the year 1607.

Similar to most of the bridges during that time, The Pont Neuf is built as a series of short arch bridges, after the Roman design of the earlier bridges. In Paris, this was the first stone bridge that did not support houses. The surface was also fitted with pavement that protected pedestrians from horses and mud. There was also a part wherein pedestrians could step aside so that bulky carriages could go through. Henry IV decided not to allow houses on the bridge since it would block the view of Louvre.

At the start, the bridge dealt with heavy traffic. For a long time, this was known as the widest bridge in Paris. It went through so many repairs and renovations which included reconstruction of seven spans in the long arm. The roadway was also lowered by changing the arches from semi-circular to elliptical in shape. During 1885, one of the piers at the short arm was undermined. Two adjacent arches were removed and a new one was rebuilt, making the foundation stronger.

A huge restoration of Pont Neuf started in 1994. It was finally completed in 2006, by its 400th anniversary.

Admission Fee for the Pont Neuf:

Getting to the Pont Neuf: