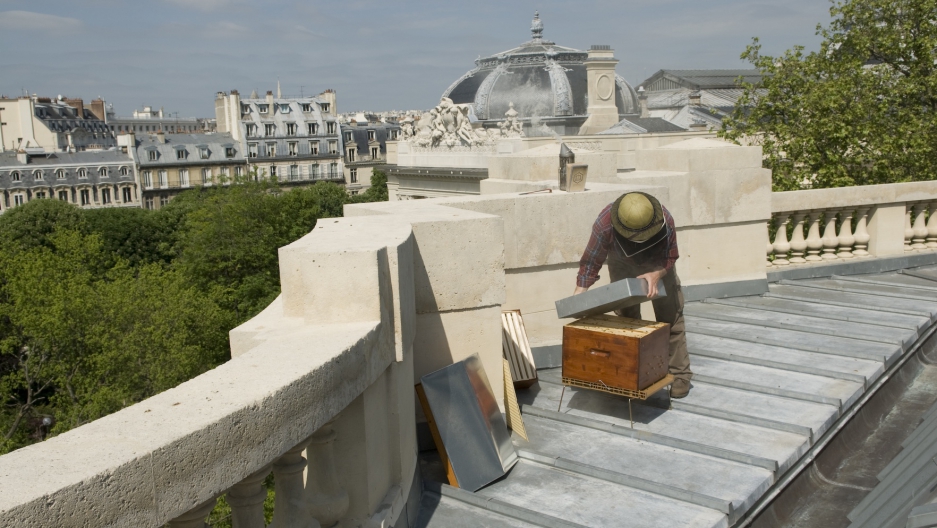 The floral honey, which is made from pollen and nectar taken from a three-kilometer perimeter around the Grand Palais (Paris is home to masses of small flowers, acacias, lime trees, chestnuts and even lavendars), will be labeled “Grand Palais Honey”. With its first harvest, the bee project is already gathering a lot of media attention. The website grandpalais.fr will have a broadcast of the harvest.

The first Grand Palais beehive was installed on May 7th 2009, followed by the second a few days later. There are plans to install three more hives next year.

The EPGPCE (Etablissement public du Grand Palais – the body that manages the Grand Palais) is making its mark in helping to safeguard biodiversity and studying these city bees.

Contrary to public belief, bees are actually more at home in the city than they are out in the country. In the countryside flowers tend to be more polluted with pesticides, fungicides and insecticides. In rural environments where a beekeeper may only get about 10 to 15 kg of honey, in downtown they can collect as much as 50kg, 3 to 4 times as much!

About the author: Paul Martin is a semi-retired writer based in Paris, France and Newport Beach, California who between travelling and spending time with his grandchildren, contributes to free information sites such as