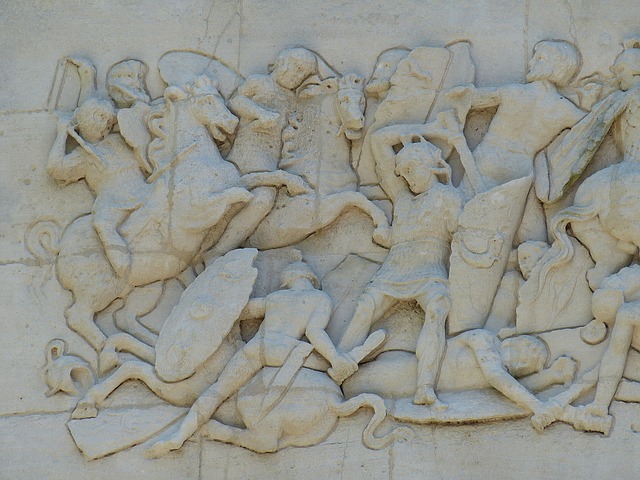 In 1833, during the speech before the Chamber of Deputies to vote in the budget, Thiers justified Louis-Philippe’s decision to complete the triumphal arch in the name of the armies of the Republic and the Empire, by declaring: “Arriving after forty years of political trials of all sorts, this government has established its goal to resume, complete, and consolidate all institutions which had been tested previously. It would be consistent and preferable, therefore, in assuming large-scale projects, to complete works already begun than to initiate new ones”.

Louis-Philippe resumed the construction of the triumphal arch by renewing Napoleon’s intentions: to show his gratitude to the armies of the Empire without forgetting to include therein those of the Revolution. This gesture proved that he did not reject Revolutionary values, memories of which had been a determinant force during the barricades of 30 july 1830. The arch had taken on the entire commission for the sculptural programme under the Restoration (initiated by architect Huyot) had to be modified. Thiers was charged with the task. An art critic and collector, he had a predilection for the Revolution, Consulate, and Empire (to which he devoted several books). All factors predisposed him to devote close attention to the edifice which was to glorify thses periods.

Its sculpture was executed between 1833 and 1836. If the chosen themes were obligatorily conventional, the selection of sculptors had to reflect as well the national spirit of the ,onument. This explains the presence of artists with classical tendencies (Cortot and Lemaire) and sculptors allied to new Romanticism (Etex, Gechter, Chaponnire, Marochetti, and Feuchere). Prestigious sculptors (such as Rude and padier) and young talents rubbed shoulders. Determined to be popular and to make the monument a genuine national and ‘social’ work place for unemployed sculptors, the Government parceled out the commission among twenty-two artists. Critics deplored this lack of unity and regretted that Thiers had not confided the most important section to Rude, whose brilliant work surpassed all other sculpture on the arch.

The Arc de Triomphe was one of the rare buildings of the July Monarchy to have accommodated so much Romantic sculpture. The Battle of Jemmapes, the Battle of Austerlitz, Crossing the Arcole Bridge, and The Conquest of Alexandria give evidence of a Romantic spirit which had played a role within the artistic avant-garde since1820. Characters in perpetual disequilibrium and turbulent scenes constituted veritable snapshots: heroic drama was deemed worthy as the main subject of these sculptures. They perfectly translated the Romantic ideal: action and sacrifice as the means to combat blind forces of destiny. Other works manifested a more ambiguous character, drawing from Classical and romantic tendencies, as witnessed in Etex’s works, The Resistance and Departure of the Volunteers, the later defying classification.