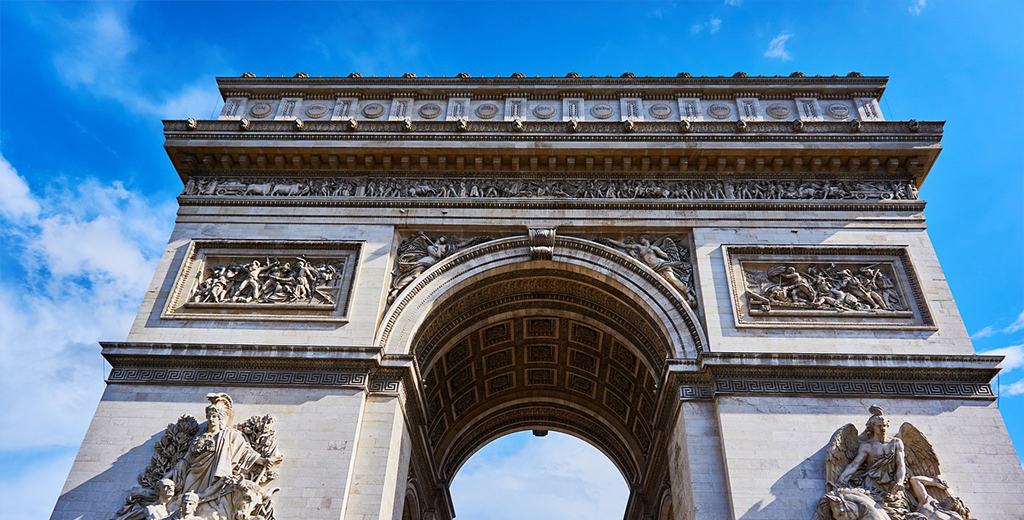 Napoleon I had an ambition to make the capital of his empire the most beautiful city in the world. On 17 February 1806 plans for “a column dedicated to the glory of the Grand Armee” (currently the Place Vendome column) were confirmed and on the 18th of February, an Imperial decree authorized the completion of the Pantheon and the “erection of a triumphal arch at the entry to the boulevard by the site of the former Bastille prison that upon entering the Saint-Antoine district, one would pass through this “triumphal arch”.

In March 1806, architect Jean-Francois-Therese Chalgrin was given the task of finding the best possible location for the arch. He studied several different options and on May 9th, Napoleon agreed to the site: Place de l’Etoile. (1)

On May 11th 1806, the project was given to trusted architects Chalgrin and Jean-Arnaud Raymond. And on August 15th, 1806 the first stone was laid to coincide with Napoleon’s birthday. Several of the most prominent architects which included Antoine-Chrysostome Quatremere de Quincy, Charles Percier, Alexandre-Theodore Brongniart and Pierre-Francois-Leonard Fontaine, First Architect to Emperor Napoleon I, gave their opinions on the project.

It took over two years just to lay the foundations and Chalgrin had some unexpected good fortune in 1810 with the marriage of Napoleon and Archduchess Marie Louise von Hapsburg of Austria as he was able to see his drawings brought to life. A wood and painted canvas replica of the Arch was constructed the same as it was to be built. This ceremonial arch allowed Chalgrin to make some last second changes after seeing what it would look like.

The work was taken over by Louis-Robert Goust (Chalgrin’s former pupil), after the architect and designer, Jean Chalgrin, died in 1811. Unfortunately, construction was halted in April 1814 after imperial defeat and invasion.

On 19 August 1824, architect Jean-Nicolas Huyot was commissioned to modify Chalgrin’s plans. Huyot had recently returned from an extensive study abroad of antique remains. Huyot proposed major changes which were deemed both risky and extravagant. On 12 May 1825, Charles X ordered that Chalgrin’s plans would be completed and 16 December of that same year, Huyot was removed from office by the Minister of the Interior for failing to comply with orders.

In January 1828, Huyot benefited from the fall of the Villele Ministry and again took over his post. Huyot would again and finally removed from this task on 20 July 1832 and would be replaced by Guillaume-Abel Blouet who would see to the completion of  the Arch in 1836. (2)

The Astylar design in the Neoclassical version of ancient Roman architecture is by Jean Chalgrin.  The Major academic sculptors of France are represented in the sculpture of the Arc de Triomphe, namely Cortot, Rude, Étex, Pradier and Lemaire.  And the main sculptures are treated as independent trophies applied to the vast masonry masses. The four sculptural groups at the Peace, are both by Antoine Etex.

The most renowned of them all, the Departure of the Volunteers, which is commonly called La Marseillaise, is by Francois Rude.  And it was the face of the allegorical representation of France calling forth her people on this last sculptural group that was used as the belt buckle for the seven-star rank of Marshal of France. In the attic above the richly sculptured frieze of soldiers there are 30 shields engraved with the names of major revolutionary and Napoleonic military victories.

The inside walls of the monument lists the names of 558 French generals with the names of those who died in battle being underlined.  Also inscribed on the shorter sides of the four supporting columns, you can see the names of the major battles of the Napoleonic wars.   Yet the battles that took place in the period between the departure of Napoleon from Elba and his final defeat at Waterloo were not included. The sword carried by the Republic in the Marseillaise relief broke off, apparently on the day that the Battle of Verdun began in 1916.

The Tomb of the Unknown Soldier from World War I rests beneath the Arc. France took the idea from the Unknown Warrior in Westminster Abbey in the United Kingdom.  It was originally decided November 12th, 1919 to bury the Unknown Soldier’s remains in the Pantheon, but a public letter-writing campaign led to the decision to bury him beneath the Arc instead.  Begun on Armistice Day 1920, it has the first eternal flame lit in Western Europe since the Vestal Virgins’ fire was extinguished in the year 391 and it burns in memory of the dead who were never identified in both World War I and World War II.  The coffin was put in the chapel on the first floor of the Arc on November 10th 1920 and put in its final resting place on January 28th 1921.  The slab above carries the inscription “Here lies a French soldier who died for his fatherland 1914-1918”.

Every year, on 11 November, a ceremony is held in commemoration of the anniversary of the armistice which was signed between France and Germany in 1918.  Many famous victory marches have led past the Arc de Triomphe including the Germans in 1871, the French in 1918, the Germans again in 1940 and the French and the Allies in 1944 and 1945.

Articles are published regularly which feature unique insight into the design, construction and history of the Arc de Triomphe Paris in our article section.