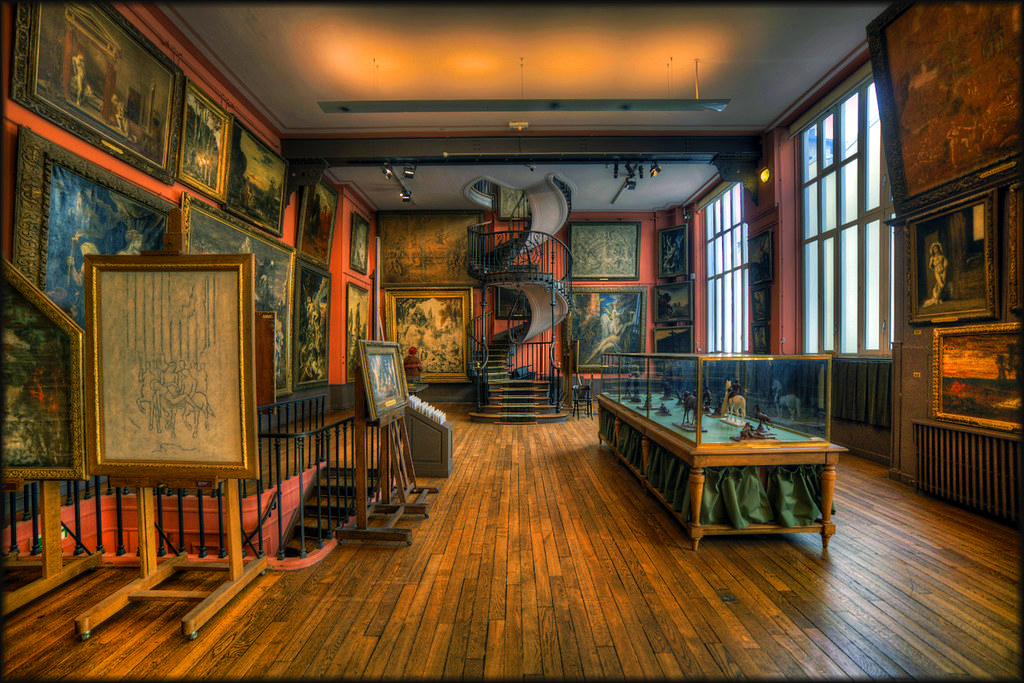 A walk between two of the city’s old fortified walls, mixing parts of Paris where few people go with others that are well trodden. A mixture also of times and characters, from the boulevards to a Jewish quarter, some important catholic churches, the Nouvelle athenes, the sex shops of Pigalle and the important Cimetiere du Nord, dit de Montmartre. The exquisite Musee Gustave –Moreau is on the way, as are the Folies-Bergere and Casino de Paris. This is a part of Paris that was cherished by artists throughout the 19th century.

Refreshments: Many interesting places, especially if you like exotic food: there are Jewish, Greek, Turkish, North-African and Spanish restaurants-not to mention some good French ones. There are cafes all over the place on the boulevards at the walk’s beginning and end.

Which day: any day except, if you want to see the museum, Tuesday.

Leave the station via the Boulevard de Bonne-Nouvelle exit. Go left along the right hand side of the boulevard, created by Louis XIV as part of a ring of course to enhance the city. For a long time tree-lined and a fashionable place for a promenade, they were gradually absorbed by the city’s expansion, and were built up through the late 18th and 19th centuries. In the last century the boulevard from the Republique to the Paris attraction Madeline were fashionable places for entertainment, with cafes and places for amusement everywhere, but today they are somewhat seedy.

Cross Rue du Faubourg-Poissonniere (previously Chemin de la Maree) – the road by which fish used to be delivered to the city’s market-onto Boulevard Poissonniere. At no 24 is the Max Linder Cinema, one of the best and most attractive in Paris. On the other side is another celebrated temple of the cinema, the Rex, built in 193; there used to be many hotels on that side of the street. In this part of the boulevard there are still lots of amusement stalls-shooting, fortune-telling, etc- and people mill about until the small hours in search of fun.
When you reach the enormous café Brebant, turn right into Rue du Faubourg-Montmartre, a section of the ancient track that led from Lutece to Montmartre. There are many Neoclassical buildings. At no 4 is a late-18th-century hotel while on the other hand-side is the Restaurant Chartier-top-notch décor and ambiance, not-so-top-notch cuisine-in the courtyard of no 7. At no 8 is the Palace, once the music venue and disco where the visitors of Paris went in the late 1970s and early 1980s.

Just before the Palace, at no6, is the entrance to Cite Bergere, created in 1825 at the same time as many of the other Parisian passages. This particular cite was primarily a residential development. Heinrich Heine (1797-1856) lived at no 3 and Frederic Chopin (1810-1849) at no 4. At no 19 Rue du Faubourg-Montmartre is Rue de la Grange-Bateliere, leading to the Hotel Drouot, the French Sotheby’s, there are many antiques shops nearby.
At no 20 Rue du Faubourg-Montmartre, turn right into Rue Geoffroy-Marie, opened 1835 on an estate given to the Hotel Dieu hospital in the 13th century by a cobbler, Geoffroy, and his wife, Marie, on condition that the hospital feed and clothe them for the rest of their lives. In the 19th century the hospital sold the land for development and made quite a profit.

Get to Rue Richer at the end of the street: facing you is the famous Folies-Bergere, which dates from the 1860s, although the building receives a comprehensive Art Deco conversion in the 1930s. Turn left along Rue Richer. Built on the site of the Grand Egout (large sewer), it dates from the elate 18th century and is lively shopping street; like Rue Geoffroy-Marie, it contains many Jewish restaurants and delicatessens.
When you reach Rue du Faubourg-Montmartre again you will find, facing you at the corner with Rue du Provence, a fine grocery store with original 19th-century décor: ‘A la mere de famille, fondee en 1761 (‘The Housewife-Founded 1761’) announces the sign outside.
At the junction of Rues Richer and du Faubourg-Mionmartre, turn right into the busy Rue Cadet, where there is a good street market most mornings. Many of the houses on the right-hand side were demolished in 1856 to make a way for the Grand Orient de France (French Masonic Great Lodge), also housing a museum of freemasonry. On the other side, at no 9, is a splendid 1750s hotel.

Rue Cadet continues as Rue de Rochechoart; be careful as you cross the very busy Rue La Fayette, an important thoroughfare from the Opera to the outskirts of Paris, created in the 19th century by claude Rambuteau (1781-1869) and Georges Haussmann (1809-1891). Rue de Rocheachouart is named for the abbess who rules the Abbaye des Dames-de-Montmartre 1717-27.

After crossing Rue La Fayette, turn left almost immediately into Rue Lamartine, a typical Parisian street of the 19th century.
Reach rue Flechier, on your left (opposite Rue des Martyrs), and walk down it to Eglise Notre-Dame-de-Lorette, built 1823-36 by Louis Hippolyte Le Bas (1782-1867) on the site of a 17th-century chapel. The building was inspired by Santa Maria Majora in Rome: it has an imposing portico supported by four large Corinthian columns and a pediment ornamented with symbolic statues. As with many other Parisian churches of the period, it has richly decorated if somewhat severe interior. It takes its name from the lorettes, the young girls thronged from the provinces in the 19th century to seek a job in the capital, and who then often lurched into prostitution. A large contingent lived in this newly created quartier

Take a turn to the right outside the church and walk along its western wall into Rue St-Lazare. Cross to Rue Notre-Dame-de-Lorette, going gently uphill. You are now in the Quartier St-Georges, home to many artists, including Jean Baptiste Pegalle (1714-1785), Theodore Gericault (1791-1824), Eugene Delacroix (1798-1863) and Paul Gauguin (1848-1903). Sometimes this part of the city is called Nouvelle Athenes, though strictly speaking that name should be apply only to the luxury development, done during the Restoration, a little further on.

Rue Notre-Dame-de-Lorette, which was created in 1824-5, takes you to the circular Place St-Georges, developed at the same time. On the left is Hotel Thiers (rebuilt in 1873), now housing a large library (visits only appointment). On the other side is a fine neo-Renaissance hotel (dating from 1840), heavily decorated with sculptures, pilasters, and so on. The street continues in the same vein after Place St-Georges. Delacroix had his studio at no 54 before moving to Place de Furstenberg, and Gaugin was born at no 56.

A nearby street of interest is Rue Lafarriere (first right in Rue Henri-Monnier after Place St-Georges, then first right again): the Symbolist poet Stephane Mallarme (1842-1898) lived at no 12. Follow Rue Laferriere round to return to Place St-Georges. If you need a rest, the half hidden square recently created in the gardens of the Hotel Thiers is very agreeable.

Now take a left down Rue St-Georges, developed haphazardly in the late 18th and 19th centuries. There is an interesting trompe l’oeil at the corner with Place St-Georges, and Auguste Renoir (1841-1919) had his studio at no 35. Take a right into Rue d’ Aumale, developed in the first quartier of the 19th century-Richard Wagner (1813-1883)lived at no 3-and go along to Rue de la Rochefoucauld, where you turn left.

You are entering the real Nouvelle Athenes, completely developed with semi-luxury private houses in the 1820s, on the site of small market gardens and aristocratic folies. There are good hotels at no 19 (1827) and no 11. At no 14 is the remarkable Musee Gustave-Moreau, a smaller attraction in Paris when you consider what tourists want to see these days, but it will be uncrowded and nice to see.

Gustave Moreau (1826-1898) was celebrated in his day by Joris Karl Huysmann (1848-1907)-the dandy writer of A Rebours (1884), used by Oscar Wilde (1854-1900) as a model for Dorian Gray-by Marcel Proust (1871-1922)-who used Moreau as a model Elstir in A la Recherche du Temps Perdu- and by many other contemporaries. He remained perhaps too much of a painter’s painter: he disliked salons and exhibited rarely. His work was largely forgotten until Andre Breton (1896-1966) and Andre Malraux (1901-1976) began to sing its praises, and slowly it regained the recognition it deserved. For a long time considered by history to have been more a pedagogue than an artist- he headed a workshop at the Ecole des Beaux-Arts in the 1890s, his students including Henri Martisse (1869-1954), Georges Rouault (1871-1958) and Pierre Bonnard (1867-1974) he is now recognized as one of the masters of the 19th century and a precursor of the Fauves.

The house in which he lived for 45 years-converted just a few years before his death, with the removal of his own studio and the addition of two new floors-was bequeathed by him to the Ecole des Beaux-Arts. His apartment contains many fine objects, including a piece by Bernard Palissy (c1509-1589), aside from his own work: the museum has nearly 1200 oils and watercolours (many unfinished) as well as more than 12,000 drawings-he was a magnificent draughtsman-of which about 5000 are on show. It is fascinating work, perhaps a little perplexing at first since so many of the subjects are borrowed from the classics and the Bible. The large paintings are remarkable, but to take time to look at the watercolours and drawings in the innumerable drawers of the of the various cabinets. As class C or D attractions go, this is a nice museum.

Leaving the museum, cross Rue de la Rochefoucauld over to Rue de la Tour-des-Dames, created in the 1820s over an ancient track, and the centre of the Nouvelle Athenes. The houses are typical of the 1820s, the more interesting ones being no 1, by Lodovico Visconti (1791-1853), no 3, no 5 and no 9, built for Francois Talma (1763-1826), Napoleon’s favourite actor. The power station on the other side at nos 16-20 is an interesting example of early industrial design and architecture.

Turn left into Rue Blanche, which runs over the site of an old track that led to the quarries of Montmartre; the street’s name probably refers to the white plaster dust from the carts. Reach Place d’ Estienne-d’Orves, named for the Resistance hero honore d’ Estienne d’Orves (1901-1941), killed by the Nazis; the place was created in 1860 ( as Place de la Trinite) on the site of a then-celebrated café, the Grande Pinte, where important meetings took place preparing the revolution of the Trois Glorieuses in July 1830, which ended Bourbon rule.

The large church now facing you is Eglise de la Trinite, built by the official architect Theodore Ballu (1817-1885), a great unashamed mixer of style, a clever restorer (e.g tour St-Jacques) and the rebuilder of the Hotel de Ville. The Trinite has recently been restored to its original splendor. Olivier Messiaen (1908-1992) was organist here for over 40 years until his death. The church, a light building with a large nave (ribbed vault) and small side-chapels, is a representative of the decoration and architecture of the Second Empire as a Garnier’s Opera. The rich ornamentation is by various artist of the time; a full description is supplied at the entrance.

On leaving the church, go around Place d’Estienne-d-Orves and then right into Rue de clichy, another street opened on the site of a very old track, in this instance the one that led to the villages of Clichy and St-Ouen to the north. On the left are Rues de Londres and d’ Athenes, both part of a large, mostly 1820s sector known as the Quartierde l’Europe. Carry on up the street until you reach the Casino de Paris, where Josephine Baker (1906-1975) made her name. The building dates from 1890; the great façade (recently restored), with mosaics and stained glass windows was restored recently and is more Art Deco that Art Noveau. Victor Hugo (1802-1885) lived for a while at no 21.

Admittedly, there are few major Paris attractions on this walk, but it pleasant and you get to see some stuff off the beat and path you might not otherwise see. When it comes to museums, monuments and various attractions; Paris has so much to see, you could almost never see it all.