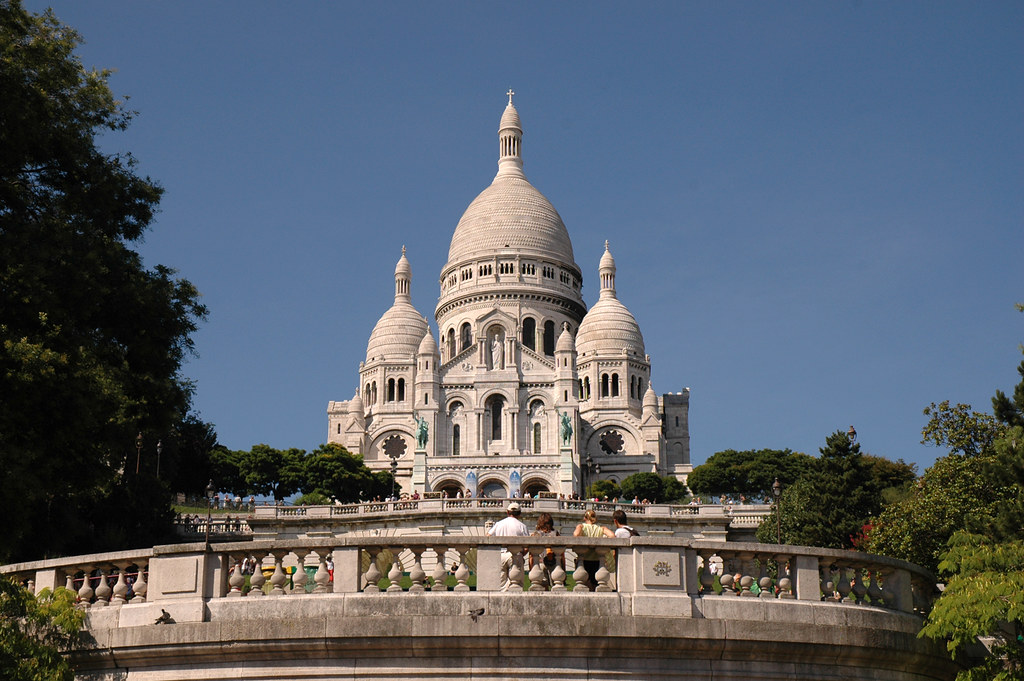 The Basilica of the Sacred Heart of Paris is also known as the Sacré-Coeur Basilica. It is a Roman Catholic Church and it is a minor Basilica. It is dedicated to the Sacred Heart of Jesus in Paris, France. The basilica is situated at the summit of the butte Montmartre and it is a famous landmark. The Sacré-Coeur is a double monument, cultural and political, both a socialist Paris Commune of 1871 crowning its most rebellious neighbourhood and a national penance for the supposed excess of the Second Empire. It is also an embodiment of the conservative moral order, publicly dedicated to the Sacred Heart of Jesus which was also increasingly popular vision of a sympathetic and loving Christ. The Sacre Coeur is now a holy place and a vibrant area of devotion to the Holy Virgin. It appeals to the pilgrims from the whole world. It also has a good network of affiliated churches.

The Sacré Coeur’s design has been attributed to the beginning of the wake of the division of the French society that rise in the decades after the French Revolution, between legitimist royalists and devout Catholics on one side and secularists, socialists, radicals, and democrats on the other. This schism became more pronounced after the Franco-Prussian War and the ensuing uprising of the Paris Commune of 1870-71. However, today, the Basilica is asserted to be dedicated in honour of the 58,000 people who lost their lives during the war. Responding to a call by the archbishop of Paris the decree of the Assemblée nationale was made on January 24, 2010. The construction of it was voted and specified that it is to expiate the crimes of the Commune.

The site of the Commune’s first insurrection was in Montmartre and many communards have dedicated themselves forever to the entombed in the subterranean galleries of former gypsum mines where they have retreated, by explosives detonated at the entrance of the Army of Versailles. There have been hostages executed on both sides, and the Communards had executed Archbishop of Paris Georges Darboy, who immediately became a martyr for the resurgent Catholic Church. His great successor Guilber, had climbed Butte Montmartre in October 1872 and some have reported that he had a vision, as clouds had dispersed over the panorama: “It is here, it is here where the martyrs are, it is here that the Sacred Heart must reign so that it can beckon all to come.”

Following the resignation of the government of Adolphe Thiers on May 24, 1873, and in the moment of the inertia, François Pie, bishop of Poitiers, expressed the national yearning for spiritual renewal. He expressed through the “Government of Moral Order” of the Third Republic and it linked Catholic institutions with the secular ones, in “a project of national and religious renewal, the major features of which were the restoration of the defence and monarchy of Rome within a cultural framework of official piety of which Sacré-Coeur is the major chief lasing triumphalist monument. The decree has voted its construction as a “matter of public utility.” The project was then expressed by Church as financial support and a National Vow. The support came from the parishes throughout France. The amazing inscription records the Basilica as the symbol of accomplishment of a vow by Hubert Rohault de Fleury and Alexandre Legentil that was ratified by Josep-Hippolyte Guilbert, the Archbishop of Paris. It took many years to complete the project.

Cross diagonally over to Eglise St-Pierre-de-Montmartre, at the top of Rue du Mont-Cenis. This church, built at the same time as the abbey on the site of an older Roman temple and almost demolished in the last century, is one of Paris’s two oldest churches (the other being St-Martin-des-Champs). Sadly, all that remains of the original 12th century building is the choir, its ribbed vault, a bit of the transept and two of the apsidioles (subsidiary apses); the vault of the nave is 15th-centuryand the façade 18th-century. The bulk of the restoration was done at the turn of the century, after many years of neglect; it has been restored again recently. The Cimetiere du Calvarie, to the left of the church, dates from Merovingian times (5th-8th centuries).

Leave Sacre-Coeur, walk down the steps and reach Place St-Pierre at the bottom of Square Willete. Those large warehouse-types building on the left house the Marche St-Pierre (fabrics only). Turn right at the bottom and first left into Rue de Steinkerque, which takes you down to the boulevard. Your metro station Anvers, is there on the left.