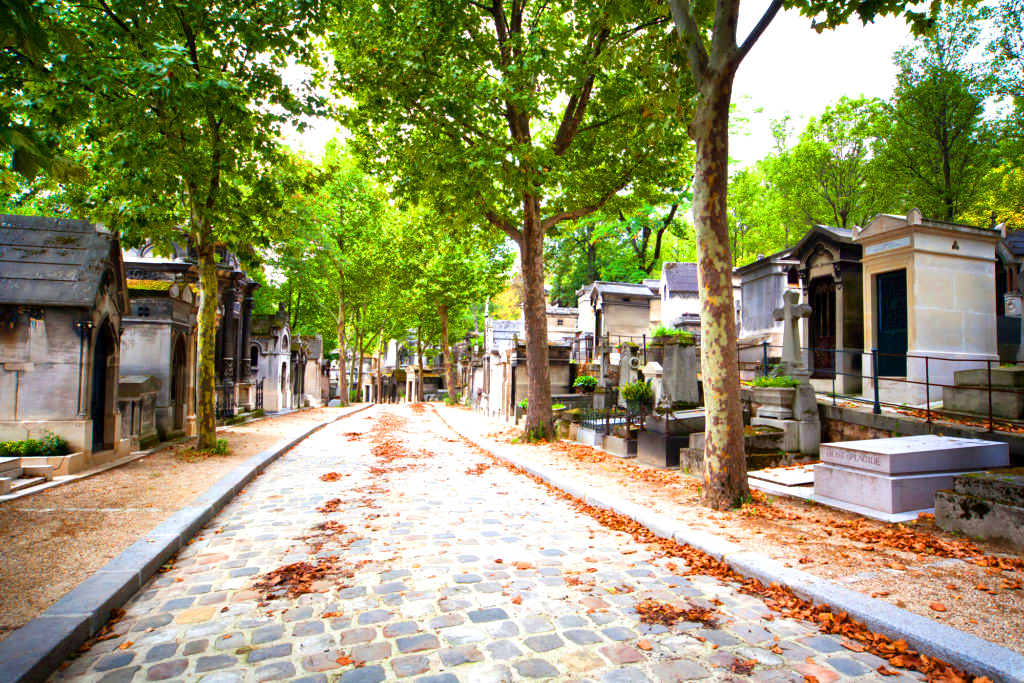 Located on about 110 acres and home to over 5,000 trees, Pere Lachaise is the biggest graveyard in Paris. It also holds the title of the biggest park in the city and the approximations regarding how many individuals are buried there fluctuate broadly, but the number is estimated somewhere near 300,000.

In addition to being a burial ground, Pere Lachaise is a leading tourist attraction, known for its graves of famous figures. No other cemetery in the world is visited as much as Pere Lachaise, something about which it is very proud. It’s always been a non-denominational burial ground which lends itself to people of all denominations visiting.

The remains of Heloise and Abelard are apparently the earliest bones identified in the graveyard. The graveyard grounds are located on a hillside once called Victor Eveque, where a rich retailer lived in the 15th century. Jesuits converted it into a Jesuit retreat and took control of his house in the 17th century. King Louis XIV’s confessor, Father Francois de la Chaise d’Aix, lived there and the graveyard’s name derives from him. The Jesuits renamed the hill Mont Louis in honor of the king, who allegedly visited the region during times of unrest, as during the Fronde.

The king’s bodyguard also had a home there, and the place became noted for its extravagant celebrations, which were joined by subjects who were anxious to curries favor with both the king and his confessor. The estate was considerably enlarged after Pere La Chaise passed away in 1709. The Jesuits were evicted from their home in the mid-1760s by means of an expulsion of the order from France. By the end of the 18th century, interment space in Paris was hard to find and city authorities became worried about the likelihood of illness spreading from the graveyards that were overcrowded.

Because of this, the Pere Lachaise area was created as a municipal graveyard in 1804. The site was created by builder Alexandre-Theodore Brogniart and produced by urban planner Nicolas Frochot. Initially, due to its location on the outskirts of the city, for a time, Pere Lachaise was used for reburials from old graveyards.

Jim Morrison of the Doors is famously buried at the Pere Lachaise Cemetery and his grave is one of the most visited. Under his name is the Greek inscription: ΚΑΤΑ ΤΟΝ ΔΑΙΜΟΝΑ ΕΑΥΤΟΥ, literally meaning “according to his own daemon” (i.e. guiding spirit) to convey the sentiment “True to Himself.” His father had this done.

If you are a tourist in Paris, here is a wonderful Paris attractions walk which takes you by the Pere Lachaise Cemetery below.

Leave the metro via Boulevard de Menilmontant exit. The boulevard was opened in the 19th century, on the site of the Fermiers Generaux wall, and developed as part of Haussmann’s strategic network of circular boulevards. Walk along the central island until you see, on your left, the massive entrance gates of the Cimetiere Pere-Lachaise.

In the 12th century, the Bishop of Paris had his wine-press here. 200 years later the estate was bought by a rich burgher, who built a country on it; it became known as the Folie Regnault. It was sold to the Jesuits early in the 17th century and became Mont Louis, a country residence for Jesuit clergy. Pere Francois Lachaise (1624-1709), Louis XIV’s confessor, bought more land for the estate. The whole property was sold when the Jesuits were expelled in 1763. In the early 1800s, when burying of the dead had become a serious problem, it was decided that Paris should have three large cemeteries. The estate bought Mont Louis to be the one of the city’s east. It was reorganized and landscaped by Alexandre Brongniart (1739-1813).

Needless to say, hardly anything is left from the gardens of the Jesuit days, although the main allee going up from the gates is original and the chapel on the far side of the Resistance ( the Monument du Souvenir) is on the site of Lachaise’s chapel.

We are going for a 45-minute walk in the cemetery (a full tour would take 2-3 hours), but feel free to wander as you please. It is a confusing place so it is a good idea to buy a map at the bookshop by the entrance.

Walk through the gates and up Avenue Principale to a T-junction with Avenue du Puits. To your left, a few meters along on the right, is the grave of Colette (1873-1954), while straight ahead, towards the Monuments du Souvenir, are the tombs of Giacchino Rossine (1792-1857), both on the left-hand side.

Turn right onto Avenue du Puits, which becomes Avenue Casimir-Perier and veers left. Go first and then first left up a small alley. At a T-junction with Chemin Lauriston is the grave of Jim Morrison (1943-1971), the lead singer of the Doors, who died in Paris from an overdose of everything. His tomb was a makeshift affair until a few years ago there was no stone, just a wooden cross in the bare earth. Most of the graves nearby are covered with graffiti done by people who have come from all over the world to pay tribute to him.

Back to Chemin Lauriston, keep going and then turn left onto Chemin des Lesseps, up to Carrefour du Grand Rond and over into Avenue de la Chapelle. Two tombstones further on, go right into a small path, Chemin de la Vierge. Pass a few derelict graves and then climb a few steps to another narrow allee, Chemin du Dragon, which takes you to sandy, crescent-shaped Chemin Moliere ( marked 24eme division), which you follow the right. Soon you come to a rather large mausoleum on the right and opposite it, the sarcophagi of Moliere (1622-1673) and Jean de La Fontaine (1621-1695)-although it is doubtful if they are really buried there.

Continue along the path to Avenue Tranversale No. 1. Go left along the avenue to the second turning on the right, Avenue des Anciens-Combattants. A little way up it, on the corner with Chemin du Quinconce, you can see the tomb of the remarkable Allan Kardek (1804-1869), the pseudonymous founder of Spiritualism in France and something a cult figure.

Continue along Avenue Transversale No 1 and take the first turning to the left, downhill along the crescent-shaped Allee Eugene-Delacroix, the imposing black tombstone of Delacroix (1798-1863) is along on the right, almost opposite Chemin de la Gare. Turn almost immediately right into Chemin du Mint-Louis, beside the monument to Casimir Delavigne (1793-1843). Here you find Honore de Balzac (1799-1850) and Gerard de Nerval (1808-1855) facing each other. Carry on in what is now called Avenue de Thuyas and turn right into Avenue Transversale No.2. Along on the left is the black marble gravestone of Marcel Proust (1871-1922).

Cross Avenue des Anciens-Combattants and take the first left to the Columbarium, which is organized around a square with a central island-the crematorium is in the middle. Walk in and you will see to your left a few steps, almost a ladder. At no 6796, by the floor, is a rather moving plaque for Isadora Duncan (1878-1927). Now climb down some large steps and find, underground as it were, the modest, curiously touching white plaque of Maria Callas (1923-1977) at the other end, in the left-hand corner at no 16258.

Go up the steps near the Callas plaque and leave the Columbarium via Avenue des Anciens-Combattants. Turn right into Avenue Transversale No 3 and follow it to Avenue Carette, second on your left. A little way down on your left you will find the monument by Jacob Epstein (1880-1950) to Oscar Wilde (1854-1900), who died in a small hotel in the Latin Quarter. Continue down to Avenue Circulaire. Gertrude Stein (1874-1946), Edith Piaf (1915-1963) and Paul Eluard (1895-1925) are to be found down the avenue to the right, as is the Mur des Federes.

Take Avenue Curculaire left all the way round to the eastern gates and exit into Avenue du Pere-Lachaise, where there are a couple of decent cafes.

The villages to the east of Paris never suffered the same degree of development and urbanization as those to the west. Besides the chateaux of Charonne and Menilmontant, the Folie Regnault and the quarries of Belleville, the population was essentially a fragmented one of market gardeners, millers-there were windmills at the top of the hills –craftsmen-shopkeepers, and so on. When the Fermiers Generaux wall built in the 18th-century, the villages grew rapidly, since the cost of living was so much lower outside the wall. The Industrial Revolution was beginning to bite, and the population if the villages of Charonne, Belleville and Menilmontant, all eventually incorporated into Paris in 1860, became a mixture of the peasantry and working class. There was only scattered development thereafter, except for a few major access roads and the great Parc des Buttes-Chaumont. Today the villages are subject to not always wise development. The remainder of this walk tries to capture something of what they used to be.

On leaving the cemetery, go down Avenue du Pere-Lachaise to Place Gambetta, created in Haussmann’s days. Turn left into the bustling Avenue Gambetta, created in the last quarter of the 19th century. Just before you reach Place Martin-Naudad, take a right into the narrow Rue de la Bidassoa, which takes you past two much altered old streets, rue Villiers-de-l’Isle-Adam, and rue d’ Annam. Rue de la Bidassoa take you downhill past a small public garden and into Rue Sorbier.

Reach Rue de Menilmontant. In the Middle Ages, this was a track leading to a small hamlet at the top and was surrounded by vineyards and woods, many belonging to rich abbeys down in the city. Chateau Menilmontant, built in the 17th- century, was further up. Jean-Jacques Rousseau (1712-1778), a keen botanist-he collected an impressive herbarium-sometimes gathered plants on the hill.

Cross Rue de Menilmontant by the pedestrian crossing, and turn left and then right into Rue de la Mare, just before you before the large Eglise Notre-Dame-de-la-Croix, built in 1869-80. Rue de la Mare, in use as long ago as 1672, owes its name to a nearby pond that collected the waters from the hill. The street continues on the other side of the pedestrian bridge over the disused railway line, and here you can sadly view what the 1970s did to old Belleville, regarded not so many decades ago as possibly Paris’s most picturesque village, and walk up the steps of the narrow Passage Plantin, with small cottages on one side and, on the other, the long back wall of the houses of Villa Castel.

Turn left into Rue du Transvaal and immediately on your left, at no 16, is Villa Castel itself, narrow cul-de-sac bordered by quaint cottages. Both it and Passage Plantin are typical of the way Belleville used to be.

Walk up Rue du Transval until you reach Rue Piat, a path that until the beginning of this century led to two windmills. Things have changed beyond recognition: this side of the hill was recently razed to make a way for Parc de Belleville: 4 hectares (10 acres), more than 1200 trees and a few fountains.

This is the highest eastern point of the city. Working clockwise, you can view the Pantheon, Notre-Dame, Tour Montparnasse, the blue-and-red- pipes of the Centre Georges-Pompidou, the Dome of the Invalides, and Tour Eiffel.