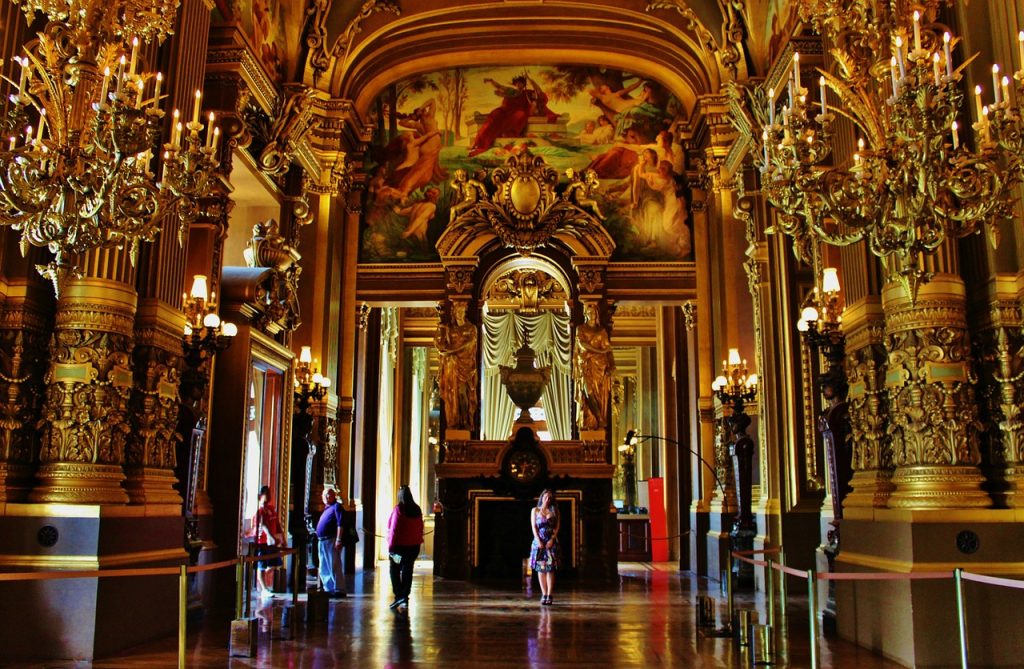 In 1862, Charles Garnier planned the construction of The Opera Garnier (Opéra de Paris Garnier) for Napoleon III. This wonderful structure was finished in 1875. The building is decorated with different sculptures, friezes as well as columns from Classical style to Baroque which is also enhanced with the presence of two gilded statues. Different materials were utilized for the outside portion of the building, like bronze, marble and stone.

The middle portion is actually more impressive and can actually be compared to Versailles. The Grand Foyer and staircase are truly amazing in decor and size. The Grand staircase is made with white marble plus green and red marble balustrade. There are also stunning chandeliers, beautiful mosaics, as well as an auditorium that is bountifully decorated. The ceiling of the auditorium was painted by Marc Chagall in 1964.

The Palais Garner is the 13th theatre to cater to the Paris Opera since it was introduced to the public by Louis XIV in 1669. It was constructed as ordered by Napoleon III. The whole plan was included in the great Parisian reconstruction project executed by Baron Haussmann. The project to make an opera house became a competition wherein Charles Garnier, a 35-year old unknown architect won. The construction of the building was from 1860 to 1875, 15 years. It was interrupted by different happenings, which includes the 1870 war, fall of the Empire, and also the Commune. It was on January 5, 1875 when the Palais Garnier was inaugurated.

The plan for the Palais Garnier was that it be included in the great reconstruction of Paris in the Second Empire which was headed by Emperor Napoleon III. He picked Baron Haussmann to look over the reconstruction. In 1858, Napoleon III allowed Haussmann to clear the land which measured 12,000 square meters so that the second theatre for the famous Parisian Opera and Ballet companies can be built. An architectural design competition was held for the project in 1861 wherein architect Charles Garnier won. During the same year, the foundation stone was laid, as the construction began in 1862.
The construction of the opera house went through so many delays. One of the biggest problems encountered was the postponement of putting the concrete foundation because the ground was swampy and overflowed water from the subterranean lake. It required eight months for the water to be pumped out at the area. Also, the Franco-Prussian War took place. At his time, the construction of the opera house was sporadic, and some people even said that the place might be abandoned.

By October 29 1873, a good thing came to the Palais Garnier. The Salle Le Peletier, which was the former venue for Paris Opera was destroyed by a fire that lasted for 27 hours. The place has been the original venue for the Opera since the year 1821.

By the end of 1874, Garnier, together with his huge workforce finished the Palais Garnier. The place was then formally inaugurated on January 15, 1875 together with a splendid gala performance.

In 1896, one person died due to the falling of one of the counterweights of the grand chandelier. Because of this, as well as its underground lake, cellars, the building, became the inspiration for Gaston Leroux on his 1910 novel entitled The Phantom of the Opera. It was in 1969 when new electrical facilities were installed at the theatre.

The opera also underwent some renovation in 1994, which included modernizing the stage machinery and also electrical facilities. At the same time, they wanted to preserve the unique decor and also strengthened the foundating of the building. The restoration was finished in 2007.