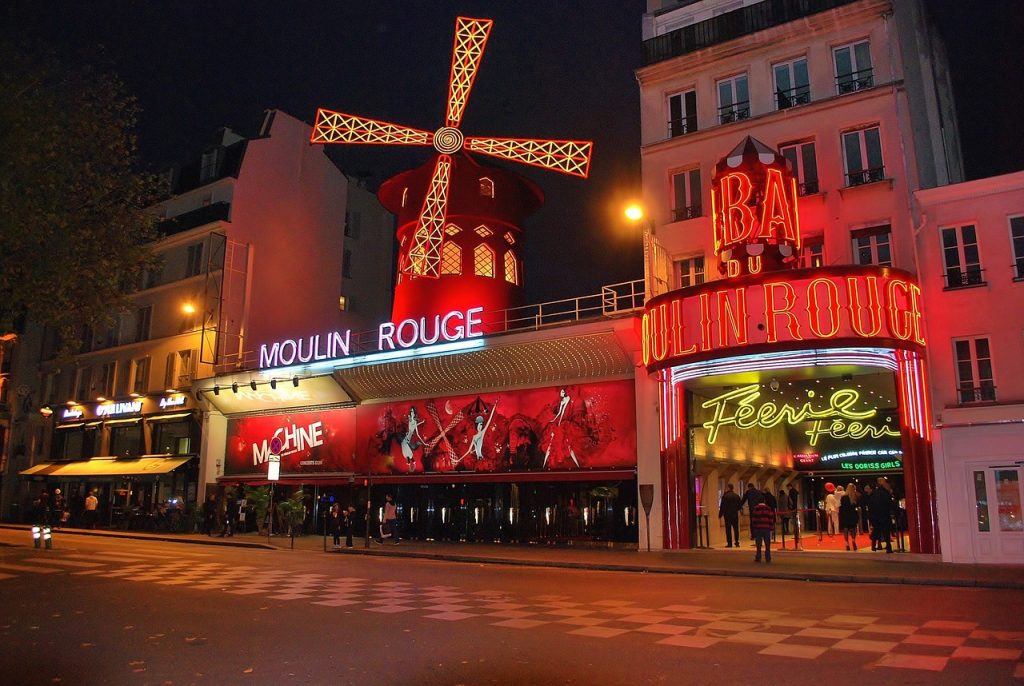 Founded in 1889, this cabaret was known all over the globe for its popular French Can-Can presentation and was forever immortalized with the artworks of Toulouse-Lautrec, a French artist. Up to now, the famous Red windmill can still be seen overlooking the Pigalle district. Dreamed up by Mistinguette, a cabaret singer during the 1930s, the presentations showcased wonderful sets, extravagant costumes as well as a line-up of amazing international dancers. Get yourself a treat by dining at Moulin Rouge as you witness great night entertainment in one of the most well-known tourist spots in Paris. Formal attire is a must.

Last October 1889, Paris greatly talked about the opening of a new music hall. Joseph Oller and Charles Zidler who are owners of the place, picked the name Moulin Rouge (which means Red Mill) for the theatre. They also gave it a nickname “Le Premier Palais des Femmes” (The First Palace of Women) and boasted that the entertainment place would be known as “a temple of music and dance”.

Moulin Rouge quickly got the reputation for being the area where men can watch young girls of Paris execute great dance moves which were as flexible as their morals. And even though the popular Can-Can dance was already around in working class ballrooms by the year 1830s, the early days of the Moulin Rouge established it popularity. During the first few years when the theatre was open, it featured a bawdy dance done by courtesans just to make their male clientele happy. The times came when the performances and presentation were quite vulgar that it caused a public outrage. The people were no longer happy of the idea that young women entertained men with their vulgar presentations and costumes.

During this time, an artist named Henri de Toulouse-Lautrec, who is also known as a notable patron of the place, painted a couple of popular Moulin Rouge scenes. His paintings immortalized the popular scenes of the shows presented at the music hall.

The place did not only feature amazing dancers but they also presented an impressive setting. Their costumes were equally wonderful. All over the world, the Moulin Rouge is known for its extravagant setting decor, as well as costumes for the dancers that has plenty of feathers, sequins and glitters on it. Moreover, their hair and makeup were impressive as well.

After some time, Moulin Rouge cleaned up their act and the place was no longer known to be a brothel. Instead, it was identified as a fashionable music hall made known for its bizarre cabaret shows which attracted high-profile clients who of course, come in their beautiful gowns and tuxedos. The Can-Can was even toned down a bit, though there are still modern patrons who give comments saying that the signature moves are still a little naughty. But, the main reason why patrons still go and visit the Moulin Rouge is to be entertained by the high-kick moves, splits, cartwheels and other wonderful acrobatics by the dancers.

The place is exclusive for adults even if their presentations were not as vulgar as before. Children are not advised to go the area. What parents could do is hire a reliable baby sitter to watch over the kids for the night as they enjoy dining and watching amazing performances at the Moulin Rouge.

Since the year 1889, The Moulin Rouge was known all over the world for its French Cancan. It was immortalized by a painter named Henri de Toulouse-Lautrec who featured beautiful shows from Valentin-le-Désossé and la Goulue’s Quadrille to the Redoutes and Operettas, from Colette to Mistinguett’s great revues. The concept stays the same at Moulin Rouge, the glitter, feathers, wonderful setting, original music, and especially the prettiest girls in the world!

For almost 110 years, the most popular cabaret worldwide continues to welcome millions of people who admire their popular shows.

Back in October 1889, Paris was talking about a new music hall to be opened. The establishment was owned by Joseph Oller and Charles Zidler who picked the name Moulin Rouge (which means Red Mill) as the name for their theatre. They also gave it a nickname, “Le Premier Palais des Femmes” (The First Palace of Women). They both claimed that the place would become “a temple of music and dance”.

Moulin Rouge was known to be the place where men can check out young girls of Paris executing unique and amazing dance moves. Though the popular Can-Can dance was already in ball rooms during the 1830s, Moulin Rouge covered its popularity. During the first couple of decades of the establishment, the place was more known to have bawdy dance performances by girls who entertain male spectators.

There were times that the performances were so vulgar and it caused a negative reaction by the public. During this time, one of the most notable patrons of the music hall, Henri de Toulouse-Lautrec painted a lot of popular scenes from the Moulin Rouge.

After some years, the company came up with cleaner performances and lost its reputation as a brothel eventually. Instead, it was now known to be a fashionable music hall, popular for its unique cabaret shows, and getting the attention of high-class clientele. The Can-Can was also toned down a bit, but there are still modern patrons who believe that the signature moves are still a little naughty. But, it is still the main reason why patrons visit Moulin Rouge and they leave the place being entertained by the high-kick moves, cartwheels, splits, and other great acrobatic tricks by the dancers.

Now, visiting the Moulin Rouge is still popular to the adult tourists of Paris. You’ll see a lot of visitors taking pictures of the large red windmill that can be found on top of the theatre. Plenty of visitors make reservations to see a nightly show at the place.

The show presents more than 100 performers with their beautiful and shiny costumes with feathers and sequins on it. The sets are brilliant as well. But, take note that the place is only for adult entertainment. Children should go to a different place or they could also get a reliable baby sitter so they can go there without their children.