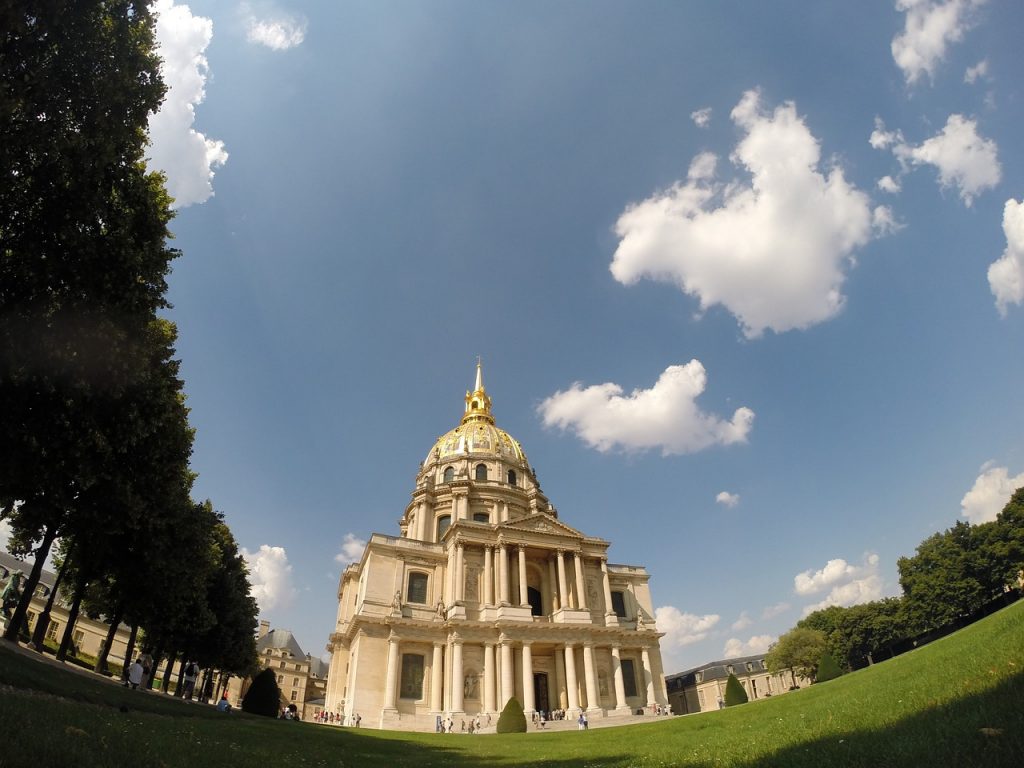 The group of buildings in the 7th arrondissement of Paris, France are known as Hotel Les Invalides, which is officially known as L’Hôtel national des Invalides (The National Residence of the Invalids). The buildings here are popular Paris museums and national monuments, all of which relate to the French military history.

Within the Invalides complex is also a retirement home and a hospital for French Military veterans. Hospitals and homes for veterans are what the buildings were historically designed to do in the first place some three hundred and fifty years earlier. Some of the attractions of the Invalides are the military museum of the Army of France, the Musée de l’Armée; the Musée d’Histoire Contemporaine and the Musée des Plans-Reliefs.

On of the huge draws and what makes the Invalides a popular Paris tourist attraction is that it is the final resting place of Napoleon. While other famous French military heroes are here, Napoleon Bonaparte is a famous world renowned historic figure and tourists from around the world visit the Hotel les Invalides to see his tomb.

Through an order dated 24 November 1670, Louis XIV initiated the Invalides hotel project as a home and as a hospital for sick and older French military veterans. The name is actually a shortening of hôpital des invalides. Libéral Bruant, a Frenchman most famous for his design of Les Invalides was the architect of the project.

The complex’s courtyard (cour d’honneur) is extended in the north by a wide public esplanade (Esplanade des Invalides) where the embassies of Finland and Austria are neighbours of the French Ministry of Foreign Affairs. All of these entities form one of the grand open spaces in the center of Paris. At its far end, the Pont Alexandre III bridge links the Petit Palais and the Grand Palais. The Pont des Invalides is next, downstream the Seine river. The Hôpital des Invalides spurred William III of England to emulation, in the military Greenwich Hospital of 1694.

The then suburban plain of Grenelle (plaine de Grenelle) was selected to be the site for the Invalides. By the time the enlarged project was completed in 1676, the river front measured 196 metres and the complex had fifteen courtyards, the largest being the cour d’honneur (“court of honour”) for military parades. Jules Hardouin Mansart assisted the aged Bruant after it was decided that the veterans required a chapel. The chapel known as Église Saint-Louis des Invalides was finished in 1679 to Bruant’s designs after the elder architect’s death.

Not long after the completion of the chapel, Louis XIV commissioned Mansart to construct a separate private royal chapel referred to as the Église du Dôme from its most striking feature (see gallery). Inspired by St. Peter’s Basilica in Rome the original for all Baroque domes, it is one of the triumphs of French Baroque architecture.

The interior of the dome (see gallery) was painted by Charles de La Fosse, a disciple of Le Brun with a Baroque illusion of space (sotto in su). The painting was completed in 1705.

Mansart raised its drum with an attic story over its main cornice, and employed the paired columns motif in his more complicated rhythmic theme. The general programme is sculptural but tightly integrated, rich but balanced, consistently carried through, capping its vertical thrust firmly with a ribbed and hemispherical dome. The domed chapel is centrally placed to dominate the court of honor. It was finished in 1708.

Open every day of the year, except for the first Monday of every month, and January 1st, May 1st, November 1st and December 25th.
Open from 10am to 5pm (5.30pm on sunday), from October 1st to mars 31th,
and from 10am to 6pm (6.30 on sunday), from April 1st to September 30th.
EVENING OPENING on Tuesday until 9 pm from April 1st to September 30st.
The Dome Church (Napoleon’s tomb) is opened until 6.45 pm in July and in August.
The ticket offices closed 30mn prior to the closing time of the Museum.

Full fee : 9 €
Discount fee : 7 € = war veterans, for everybody from 5 pm and on Tuesday evenings, groups with prior reservation, Paris Visite (card + travel coupon, during the validity period)
Free : children under 18 years old; 18 to 25 years old nationals of the European Union
One single ticket gives access to the Musée de l’Armée, to the Tomb of Napoleon I, to the Historial Charles de Gaulle (closed on Mondays), the Scale-Models Museum and to the Order of the Liberation Museum.

ATTENTION: The Historial de Gaulle is closed on Mondays.

Getting to the Hotel des Invalides:

by the Esplanade des Invalides and by the Place Vauban

In the chapels of Saint Louis are the graves of Napoleon I’s brothers Joseph and Jerome, of his son, and of the marshals of France. Instantly underneath the cupola is a red porphyry sarcophagus that addresses the six coffins, one within the other, attaching the remains of Napoleon, which were delivered from the isle of St. Helena in 1840 throughout the attempts of King Louis Philippe. Deathbed, and Napoleon’s uniforms, private arms are shown in the front of the Invalides in the Army Museum. Some of the Invalides still functions as an army hospital.

The vast tree-lined Invalides Esplanade hills gradually to the Alexandre III Bridge as well as the Quai d’Orsay. Alexander’s son, Tsar Nicholas II, set in 1897 the very first stone for the bridge, which celebrates the Russian tsar Alexander III. The bridge was completed overtime for the international exposition of 1900, also it leads to two other mementos of the fair of that year, the Grand Palais as well as the Petit Palais. One road to the northeast of the Military Academy is the Hotel des Invalides, started by King Louis XIV.