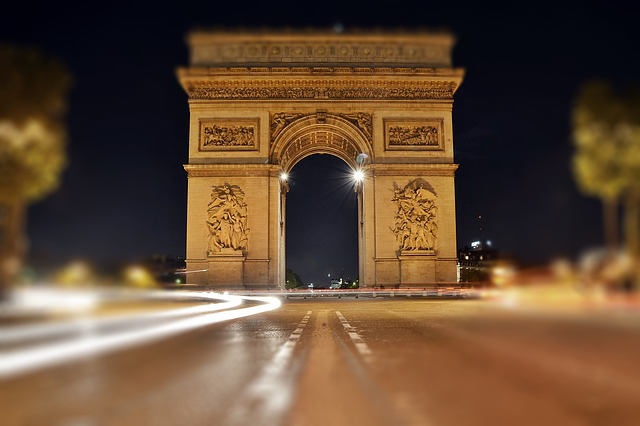 Located at one end of Paris’s most famous avenue, the Champs Elysees, the triumphal arch is older than the Eiffel Tower, but is somewhat new in the tradition of building arches to celebrate victories. The Romans did it much earlier. In fact, the Arch of Titus had inspired Napoleon to build this 19th-century tribute to his ‘Grande Armee’.

You can admire the arch from below at the ground level – either on foot while you’re window-shopping on the Champs Elysees – or by automobile if you’re lucky enough to get caught in the swirl of traffic that plays dodgem around its base. If you choose not to brave the crowds visiting the Eiffel Tower, the Arc de Triomphe is a great alternative.

It’s also less expensive if you’re traveling with students or children. Kids and teenagers, age 17 and younger get free admission.

The top can ONLY be reached by climbing up its 40 stairs. But before you get to the stairs, you have to get to the monument itself (which isn’t as simple as you’d think). DO NOT TRY CROSSING THE TRAFFIC CIRCLE!

There is an underground tunnel on the Avenue de la Grande Armee side of the circle. You can access this tunnel from the Wagram exit of the Metro.

One of the best days of the year to visit the Arc is July 14th, Bastille Day. The Bastille Day parade follows the length of the Champs Elysees and a huge flag billows from the Arch’s crown creating a colorful photo op.

Getting there
The Arc de Triomphe is located in the 16th arrondissement on Paris’s Right Bank. The 16th is located in the northwest sector of the city.
RER: line A, station Charles-de-Gaulle-Etoile
Metro: lines 1, 2 and 6, station Charles-de-Gaulle-Etoile
From outside Paris: exit Porte Maillot and avenue de la Grande Armée or exit Porte Dauphine and avenue Foch
From the centre of Paris: drive up the Champs Elysées